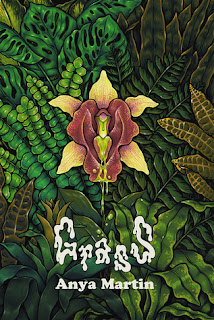 Can a body be a forest? A deep dank overgrown woods? A tangled jungle of viscous vegetation that requires a machete to slash a pathway to its dark, dark heart?

From the thickest, darkest depths of a long forgotten swamp, comes Anya Martin's novella, Grass, another knockout book from Dim Shores, a vanguard of Weird and Horror fiction. Huge props to Jeanne D'Angelo, for creating such a lush, alluring, alien-like cover that emanates vibes of mystery, erotica, and science-fiction, accurately capturing Martin's humid and swampy tale. I can honestly say that, out of Dim Shores' current catalog, it's my favorite cover.

Grass centers on Sheila, a woman living in Georgia who receives a call saying that her alcoholic, abusive ex-husband Dave, and his wife Monica, were killed in a plane crash. Due to Dave never updating his medical records, Sheila is still listed as an emergency contact and must drive to Camden County in southern Georgia to identify the body, ensuring that it is indeed Dave. After two years of trying to forget Dave and all the pain he caused her, he is suddenly thrust back into Sheila's life, and as a corpse no less! Sheila gets much more than the corpse of her ex-husband, though; she leaves the morgue with a stowaway; something alien, a primordial being that takes Sheila to new levels of passion and pleasure.

After two readings of Martin's novella, I feel like it can be considered something along the lines of a treatise on abuse against women. All the elements combined to make her tale are backdrops, where at the forefront of the tale, is Sheila's struggle to survive, attempting to live her life one day at a time, in the horrible wake of Dave's brutality against her. One would think that Sheila would have been thrilled upon hearing about Dave's death, and while there was some exultation, there were more emotions that flooded throughout her mind:


The biggest surprise was a sudden emotion of loss, sadness--no, not love! Should she be crying? Did Dave deserve her tears? She never thought she'd ever cry if he died. He deserved to die, didn't he, for what he had done to her? No, she didn't have any reason to cry. She didn't love Dave, couldn't even remember saying she did. The emotion churned, intensified into hate, the back of her head burning as it used to after he slammed his fist into it. She closed her eyes and grasped above her forehead, wincing at the pain.

For those who have never even remotely experienced what Sheila went through at the hands of Dave, it's difficult to understand why anyone would feel anything other than happiness at the death of such a disgusting human being; is it really for us to understand? Are we ever actually going to truly understand? Perhaps Sheila remembered the more pleasant times with Dave, and may have even missed those times. And, perhaps, Sheila turns to hate because, in a sense, Dave got off easy; he's dead and gone, and the majority of people who knew him will never know just how terrible he was. Worst of all, Sheila is still alive, and still dealing with the mental and emotional scars that Dave left upon her. Every single day, Sheila has to muster the mental and physical fortitude to keep going, compartmentalizing her trauma, focusing on taking care of her flowers and plants, giving her a sense of comfort

Another aspect of abuse that Anya deftly explores is the 'why'. Why did Sheila stay with Dave for as long as she did? For some, the simple answer is, "You should've left him the moment he laid his hands on you." We all want to believe it should be that easy, but, unfortunately it isn't. Anya doesn't provide the reader with a single response, but rather, through Sheila, opens up the reader to a world of reasons and the psychology behind them. Dave wasn't always abusive to Sheila; there relationship didn't start off that way, it was gradual. Even then, there were periods of calm between Dave's violence. Maybe Sheila thought the last time would be it. Maybe she found herself normalizing it. Perhaps she just focused on the better times, and that it wasn't like this all the time. She could've felt trapped, or thinking that she would never find something better than life with Dave. Dave's mental and physical abuse kept Sheila down, and in fear. Then, Dave divorces Sheila, leaving her to wonder if she was the problem the whole time, further fracturing her self-esteem and confidence; now, clearly, Sheila wasn't the problem, but you can see how Dave completely destroyed everything about her. At one point, Sheila actually contemplates suicide, wondering if it's a better alternative than living a life of trauma, triggers, and constant anxiety.

The creature, alien, whatever you want to call it, serves as not only a source of comfort for Sheila, but as a source of pleasure; something new, something different. Did Dave ever please Sheila? If he did, she can't remember when, or if he ever did. Is this the Unknown for Sheila? Because of Dave, would Sheila ever be able to let another man into her life? The swamp creature--something from a more primordial time--does more for Sheila than anyone ever did. Much like Dave, however, Sheila discovers the true nature of the creature: it must have water, and will devour anything it can to survive. Sheila found herself in the same situation she was in with Dave for all those years, and had to get out of it as soon as possible, leading to the abrupt, yet jaw dropping conclusion.

Of course, these themes and elements would be nothing without Anya's smooth prose. She uses language that creates a lush, humid, vibrant, and tragic tale. Her descriptions of the Georgia heat and humidity greatly emphasize the oppression felt by Sheila; so much, in fact, it's more than capable of making the reader heavy with the weight of Sheila's experiences. And Anya's erotic passages involving Sheila and the swamp creature are quite juicy, and do well to express what Sheila had never quite experienced.  Blending Horror, Erotica, Science Fiction, and referencing such films as Swamp Thing, The Creature from the Black Lagoon, and more, along with themes of abuse, post traumatic stress, tragedy, anxiety, and pleasure, Anya Martin crafted a tale that is on the level of being discussed in a college literature course. Anya expertly navigates these themes that many do not understand, nor, to some extent, want to acknowledge. I was only left with one question: when are we going to see an Anya Martin collection?

Posted by Joseph Zanetti at 7:54 PM No comments:

Joseph Zanetti
I'm just a guy who loves his family and friends, and loves to read. I made this blog to write reviews on tales of the weird, strange, and unknown, and any topics related to those tales.