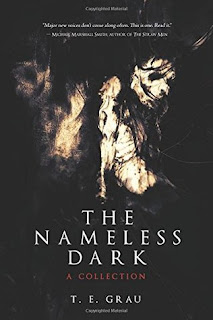 There is beauty and horror here, wisdom and madness, and I have drunk deeply of it all. Will you do the same?

But man is an arrogant ape, and so here we are, disturbing the Old Ways, while bashing out the brains of every fellow human being that doesn't look exactly like us, or bow to the same flag, sing to the same savior. Ridiculous, arrogant ape, swinging a club like a demigod.

I'm a terribly slow reader. It can take me upwards to a month (maybe a little longer) to finish anything that's over two-hundred pages. In the case of T.E. Grau's debut collection, The Nameless Dark--published by Lethe Press--it took me much longer. Not because I found it difficult to read, or that it was boring (totally the opposite). No, it was because every page, every word, had to be slowly absorbed; it demanded to be savored. The Nameless Dark is a strong debut, featuring varied and complex stories that span time and geography, combining old and new elements, making the collection fresh and exciting.

Grau's writing is gritty and raw, highly reminiscent of the work of Laird Barron. Some of his stories slowly gnaw away at your being, and some of them assault you with cosmic punch after cosmic punch; there is no defense against such powerful and primal writing, and you are left on the brink of mental lassitude and physical exhaustion. You are taken on harrowing journeys through hollowed-out urban settings, desolate desert landscapes, and far away lands that will devour you whole if you do not offer them the right amount of respect. Grau's characters are innocent, flawed, macho, hardened, vulnerable, and downright terrible.

In a few of Grau's stories, there is a focus on the concept of masculinity; or, perhaps, more specific, American masculinity, mixed with arrogance and patriarchy. In Beer & Worms, misogyny and patriarchy are taken to the extreme when Russ, the main character, admits to his friend that he killed his wife. Why? Because he couldn't stand the thought of having to ask his wife if it was okay for him to go fishing. It casts a cruel light on this poisonous mindset that is nothing short of detrimental to society as a whole. Russ is a prime example of a male dominated society; that a man should be able to do whatever he wants, and women are not his equal. Men like Russ have zero respect for women. Asking your partner if it's okay to do something doesn't make you less of anything; it's called being respectful and considerate.

In Return of the Prodigy, one of the more Mythos-oriented (Lovecraft) stories, Gary exemplifies American masculinity and harbors racist views towards anyone who is non-white. He actually reminded me of an old co-worker who basically said he saw no reason to leave the United States because it's the greatest country on Earth. Gary is just like him. He caves in, though, and agrees to take his wife, Gladys, on the honeymoon they never went on. While not like Russ in Beer & Worms, Gary takes Gladys for granted, and is often annoyed by her, despite the fact that she loves him dearly. Gary's racism prevents him from appreciating all aspects of life and culture, and is damaging to not only him, but his wife, and also the world as a whole. In Expat, more masculinity is at play, along with more American arrogance. It explores, I believe, American-centered ideas of backpacking across Europe and 'roughing it' in parts of the world that we would consider to be less modern, a means of escape. It's egotistical and disrespectful, as it tends to cast European countries in a negative light, especially Eastern European countries. And when you don't have enough respect for those places, there are consequences to be paid.

Innocence is another theme explored in Grau's collection, and how parents try to protect their children from the horrors of this world, and, in some cases, other worlds. In Free Fireworks, Jacob is a young boy living in a version of the United States where a great war happened, resulting in the worship of the Elder Gods, and the remaining followers of the monotheistic religions have become, for all intents and purposes, terrorists. It's actually a nice "the shoe is on the other foot" scenario, where one can point a finger and say, "It sucks to have religious views forced down your throat, and be made to feel less than human, doesn't it?" Jacob's father, William, wants to protect Jacob from the horrors of war as long as he can; to prolong the inevitable. It drives home the point that children are affected the most, whether it's being born in the midst of it all, or actually seeing it happen. Either way, it's traumatizing. In Twinkle, Twinkle, Phillip buys his daughter, Emily, a telescope for her birthday, so that she may look to the heavens to find her mother who had recently passed away. Emily believes she found her mother, showing Phillip, who actually thinks she discovered a new star, or something else. What it really is, though, is something so terrifying, that when Phillip finds out, he doesn't even tell Emily; he wants her to enjoy what little time is left on their planet. It's a touching and heartbreaking story; innocence in the face of inevitable annihilation. In Grau's world, it doesn't matter who you are or what you do, the universe simply doesn't care.

In Tubby's Big Swim, Alden is a young boy who knows how to navigate the not-so-nice areas of where he lives. His situation is one where he must fend for himself, as he is generally neglected by his mother because she is too buy looking for the next man to take care of. She absolutely loves Alden, though, but her priorities are messed up, and Alden often embarks on his own adventures--to escape the troubles in his life--and, even in his naive youth, manages to survive; he has to depend himself, and only himself. Other characters in Grau's stories are searching, in some form or another, for identity, or a place that they can firmly root themselves in and call home; they want a purpose. Transmission tells the story of Max, and man who never finds himself staying in one place for too long, traveling further and further west, in hopes to leave behind a checkered past. However, he finds his calling in the Nevada desert, in the form of a mysterious transmission that Max cannot stop listening to. Grau does an excellent job at making the desert frontier seem unexplored and alien; you see things... unnatural things that shouldn't exist, but you aren't sure if what you saw was real, or if it was all in your head. Max finds his destiny in a small, lonely shack, where he continues the transmission of his predecessor.

The search for identity can also be found in Love Songs from the Hydrogen Jukebox, a story that was first published in The Children of Old Leech: A Tribute to the Carnivorous Cosmos of Laird Barron. Nelson, a nomadic-type person, immerses himself in a world of drug exploration and follows the guidance of a man named Doyle, who has numerous followers and ends up becoming fully indoctrinated into a cult that worships something far more ancient than any god or goddess created by man. Grau, with great deft, captures the sort of primal atmosphere that Barron is known for, and a universe with a voracious appetite that actively seeks you out, rather than waiting for someone to seek it out. The Screamer is a corporate horror story that made me think of Christopher Slatsky's story, Corporautolysis, along with Ligottian corporate stories. Here, Grau creates a hollowed-out urban world where people go about their lives in a rather drone-like manner. In the case of Boyd, he works, goes home, maybe sleeps, wash, rinse, repeat. It's like a life of decay, and the look of the city is a reflection of that decay. It's not until Boyd hears the scream that he sort of snaps out of the doldrums, awakening him, but it doesn't matter, because in Grau's world, it all leads to extirpation.

Clean is another story that features children surviving on their own, and explores the all too real world of child predators and the horrifying things they do; yet, Grau turns the tables and creates one of the most anxiety-filled tales I have ever read. What makes it so effective is Grau's use of subtlety, ratcheting up the dread and leaving much to the imagination of the reader. White Feather is another war tale that focuses on the choices we make, based on fear and paranoia, and how those choices not only stay with us for the remainder of our lives, but how we are ostracized by the people who once called us friend or family. Mr. Lupus explores the loss of magic and imagination as the world increasingly becomes more modernized, and how greed can lead to horrifying consequences. Yet, there is something there about feeling a spark when you discover that magic is not lost, how it changes you, but then you want it all for yourself and you take it out of its element, isolating it and changing the course of things. It's a twisted fairy tale that makes for great reading around Christmas time, and it's one of the more original werewolf tales I have read. The Mission is an Old West tale that focuses on our sins, and how we must pay for those sins. It's also a meditation on racism, colonialism, and how, in the end, for all the hate and killing we commit against one another, the only thing that's waiting for us, is extinction.

With The Nameless Dark, T.E. Grau has assembled a collection of memorable stories that evoke a multitude of emotions and touch on myriad themes and issues that are more relevant today than ever. Whether it's a Mythos-inspired tale, or a Laird Barron tribute, Grau writes in a style and voice that are all his own. He has firmly planted himself in the Weird Renaissance we are currently experiencing, and should be on the radar of every reader, critic, writer, and publisher. Grau is drawing power from primordial wells, and everyone will feel it.